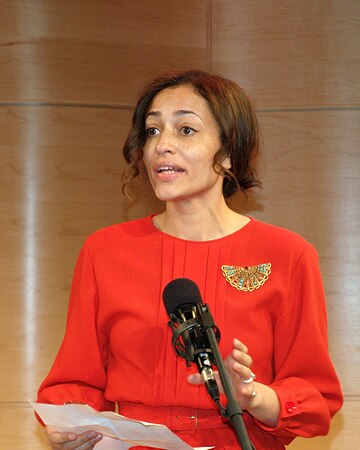 Zadie Adeline Smith FRSL (born Sadie Adeline Smith; 25 October 1975) is an English novelist, essayist, and short-story writer. Her debut novel, White Teeth (2000), immediately became a best-seller and won a number of awards. She has been a tenured professor in the Creative Writing faculty of New York University since September 2010.

Smith was born in Willesden in the north-west London borough of Brent to a Jamaican mother, Yvonne Bailey, and an English father, Harvey Smith, who was 30 years his wife's senior. At the age of 14, she changed her name from Sadie to Zadie.

Smith's mother grew up in Jamaica and emigrated to England in 1969. Smith's parents divorced when she was a teenager. She has a half-sister, a half-brother, and two younger brothers (one is the rapper and stand-up comedian Doc Brown, and the other is the rapper Luc Skyz). As a child, Smith was fond of ta…Read more on Wikipedia

Work of Zadie Smith in the library